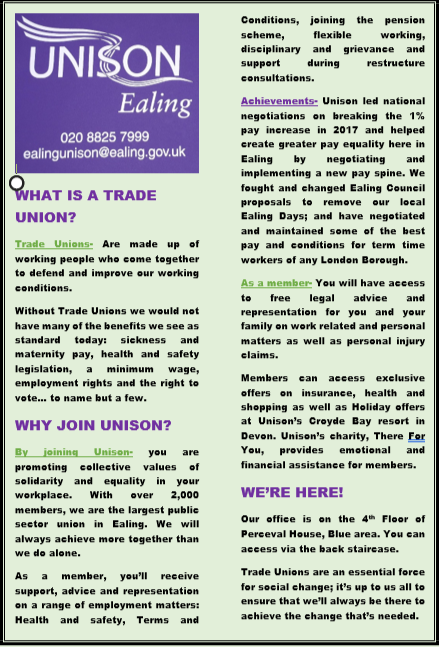 In Ealing we are the largest trade union and represent members who provide public services across the borough.

People join a trade union for all sorts of reasons.  But in the end they join because a union gets a better deal for them at work.  employers negotiate with unions, not individuals.  By working together union members can win – and protect – pay and conditions worthy of the valuable jobs they do.

Being a union member gives you a say in your working life and powerful support if you are treated unfairly.

Without a union behind you, who will you turn to:

Ealing Unison Branch has trained Stewards (representatives) and experienced Officers who are involved in both council wide negotiation on items such as policies, procedures, reorganisations, as well as dealing with individual casework from teams spanning the entire authority and outsourced services.

As well as negotiating with employers on pay and conditions UNISON provides a wide range of services to individual members including:

Visit our members section to find out more.

A trade union is as strong as its members.  Ealing Unison is no exception.  UNISON is an open and democratic union, where individual members can play a full part in the branch, in the workplace, t branch meetings and in campaigns.

Ealing Unison is committed to ending discrimination at work.  The fight against discrimination wherever it occurs – in pay, conditions or prospects – is at the heart of UNISON’s work in getting a fair deal for all its members.

So, get active in your union!

If you are not already a member, don’t delay.  Join the winning team today!

We use cookies on our website to ensure you find the information you need in the simplest way. By continuing to use our website you are consenting to their use. Find out more about cookies and how we use them.